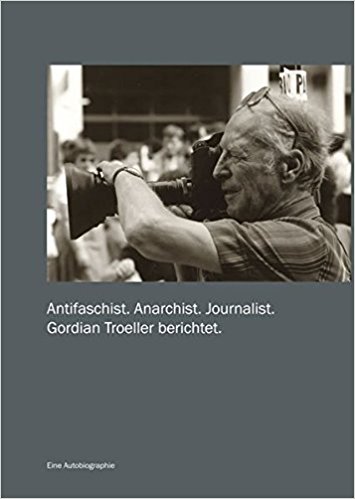 How old is Gordian Troeller?
And is it important?
“The Man with the Big Eye”, (the name stuck because his film-camera was practically glued to him all the time) is reticent about his age, not out of vanity but for practical reasons.
In 1978 he was filming the “Grey Panthers” in the United States of America. It then struck him that he had been fighting sexism, imperialism, neo-colonialism and every other kind of evil -ism all his working life. Now here suddenly was yet another trendy monster that had to be tackled: “age-ism”. The decree of youthfulness was marginalising men and women who had pushed their forties, edging them out of active service, compartmentalizing them into the “have beens”.

“Not me”, said Gordian Troeller, “My age is of no concern to anybody apart from myself. I shall film till I drop dead and as long as I have something to say”.

„The man with the Big Eye“ is no more. He died shortly after his 86th birthday at his home in Hamburg on the 22nd. March 2003, after a long illness. In his obituary his widow, Ingrid Becker-Ross-Troeller, wrote: “The zest for life, humaneness and the pursuit of justice always determined his actions”. And indeed this is the essence of the life and work of an extraordinary man, who made his last film in 1998.
The son of a Huguenot family originally from Frankfurt, Gordian Troeller was born in Lorraine/France on 16th. March 1917. Soon after his birth the family moved to Luxembourg and then to Germany in search of employment. When the fascists came to power in 1933 the family moved back to Luxembourg for good. Troeller left home in his early twenties to fight against fascism. That was in 1938, towards the end of the Spanish Civil War. His sojourn in Spain was brief, but he came home a lot wiser having learnt a vital lesson. He had witnessed ” The God that failed ” in the Arthur Koestler’s sense of the term. Communism had betrayed its children yet again. Gordian Troeller realized how hollow a rigid commitment to any one particular political ideology could be. What remained was his inborn sense of justice and his ingrained antipathy to any kind of dictatorship. “If at all, one can say that I have an extremely vexed relationship to power, I am against the right of might. In my opinion the division of the world into rulers and subjects is the root cause of the problem”.

In 1940 shortly before the German troops occupied the Grand Duchy he, once again, left home. This time on a bicycle in the middle of the night taking his Jewish fiancée, Ruth Kahn, with him. They made their tortuous way to Portugal. They got married that same year.
During the Second World War Troeller launched a short-lived but effective career as a secret service agent for the Allies. His network consisted of fishermen, streetcar conductors, postmen and prostitutes who spied on the activities of the German Gestapo and the naval maneuvers of the fascist fighting forces in Lisbon. Troeller’s organization also helped political refugees and persecuted Jews to flee from German occupied territories.
After the War, Troeller returned to Luxembourg and together with Norbert Gomand started a newspaper, the Independent (“L’indépendant”). They exposed the uncooperative and unhelpful attitude of the Luxembourg government towards their citizens during the occupation of the Duchy by Nazi-Germany. The Government was not amused and retaliated by suing the two editors for libel. The innumerable court cases caused the financial ruin of the paper.

Out of work, but undeterred, Gordian Troeller assembled a sort of uniform with bits and pieces picked up from a local flea-market. He created an interesting looking shoulder badge; bought himself an American limousine and thus equipped, launched himself on a self-appointed career as a War Correspondent. Troeller travelled widely and had ready access to all press facilities, including free gasoline and cigarettes. An encounter with a Canadian officer changed it all.
The officer took one look at him and said: „Troeller, you are a fake! You’ve got on an English battledress and American trousers and that badge on your shoulder doesn’t convince anyone”. Delighted with Troeller’s audacity however, the officer accredited him to the Canadian Army in Germany and gave him a regular uniform. At that stage Gordian Troeller was writing for at least 60 different newspapers in Europe.

In 1946 he set himself up in Madrid as Foreign Correspondent for the Dutch newspaper “Algemeen Handelsblat” . Two years later he clashed with the Franco Regime and spent three months in jail. Troeller had helped a friend, an underground leader of the Basque separatist movement, escape to France.
Deported to Holland and terribly homesick for Spanish sights, sounds and smells he drifted one evening into an Amsterdam bar which was featuring a Flamenco dancer. It was late 1948 and it was love at first sight. Marie Claude Deffarge, a young French student from the Sorbonne University was gathering practical experience for her thesis on Spanish music and dance. Gordian separated from his first wife and embarked on an extraordinary relationship. They worked together till Marie Claude’s death in 1984.

In 1949 Troeller and Deffarge were in Teheran. Marie Claude had been invited by Mossadegh’s foster brother to dance the Flamenco in the glittering Persian capital. They both fell in love with the country. This chance encounter paid off well for them. When Mossadegh overthrew the Shah in 1951 and nationalized the oil companies the first North/South conflict was born and the reporter duo had direct access to the Prime minister.
1952 was the turning point of their journalistic credo. For six months they had been on the move, accompanying the Bassiris, a nomadic tribe, traversing the length and breath of Iran. What they saw during their travels with the nomads changed their attitude irrevocably and fundamentally. Their belief in the superiority of western “civilization” vis à vis the rest of the world was shaken to the core. From then on their reporting concentrated on one major issue: ” the cultural and economic impoverisation of the so-called developing countries spawned by western growth and development policies.”
Our Man from Luxembourg and our Woman from France threw their euro-centricity and objectivity into the dustbin of history. These were requirements that no longer had any meaning in the context of what they were doing. Troeller & Deffarge stayed on in the Middle East until 1958 travelling and reporting from Iraq, Syria, Lebanon, Turkey and Iran.

In 1960 the couple moved to Hamburg to work for the illustrated weekly magazine, the Stern . It was the historic period of decolonialisation and revolutionary liberation struggles. For the next ten years the ace-team covered most of the hot spots in Asia, Africa and Latin-America. Their controversial, hard hitting reports and their incorruptible, critical gaze brought the naked truth home. They opened up a whole new world for the German readers; a world that was full of sympathy and understanding for the actual needs of the so-called developing countries.
A series of articles on the role of France in the Algerian war aggravated the French government to no end. The Stern magazine was banned for a while in that country. Soon thereafter Troeller/Deffarge had become a household name that stood for quality and a different perspective. The circulation of the magazine soared. Their cover stories entitled the “Women of this World”, were an absolute hit. Commenting on this period, Gordian Troeller, with his characteristic wry sense of humour, remarks that the Stern magazine was the best travel agency that he had ever had.

It was only a matter of time before Gordian Troeller added a film camera to his impressive battery of still cameras.
By the end of the nineteen sixties the Troeller/ Deffarge team was joined by a young German student, Ingrid Becker-Ross. She was of valuable assistance during the pre-production and production stages. By 1974 Gordian Troeller and Marie-Claude Deffarge had separated as a couple. Marie Claude returned to France, but she continued working on the films till her death in 1984. Gordian Troeller and Ingrid Becker-Ross, now living together, continued the work in the same spirit. Later Gordian and Ingrid got married.

From 1963 to 1998 Troeller made 89 films. The main canon of his work dealt with the subject “development leads only to lesser development” – a credo he maintained throughout his working life. Troeller made a conscious decision against the fiction of the “objective documentary” and opted for the concept of complete “editorial partiality” to describe his works. It is precisely for this reason that his films are particularly suitable for pedagogical purposes, far more so than so called neutral reporting: Troeller’s films are all based on theories, that can be critically assessed. Troeller has a definite point of view and his intentions are clearly stated. This is material which is hugely enjoyable and debatable. For every theory put forward reasons are given and evidence provided. It is precisely because of the fundamental questions that his films raise that these films remain so topical and worth seeing today. His canon of work will endure.